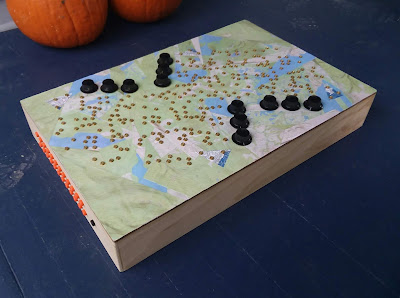 My first crack at a multiplayer instrument for small groups to improvise with. The quickest comparison I can make to something familiar is to the game Operation. In that game the goal is to avoid completing an oscillator circuit with a fixed pitch while extracting anomalies from a plastic corpse. In this game you do the opposite and intentionally short circuit a corpse full of oscillators and other circuits to produce sounds with unpredictable pitch patterns and waveforms by adorning it with conductive objects like bare wires, alligator clips, Chore Boys and by prodding it with your finger tips.

The core of this is four modified Trzypsy. The Trzypsy first dealt with the concept of an instrument that forces you to improvise to work with it and asserts itself further by rewiring itself behind the panel as you play as well as by being sensitive to outside influence. A big truck passing by or lightly tapping on the side of the enclosure can drastically or subtly change the behavior of the Trzypsy. This newer instrument expands on these concepts by increasing the number patch patch points (over 200) and adding a four channel speaker distribution system, a complex capacitive patch matrix for extra spice and perhaps the most potent wildcard: other people. 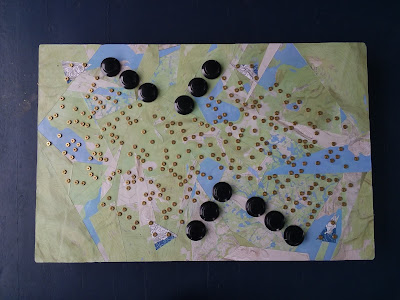 Each player can tap any patch point and connect it to the speaker distribution system. Each player has 3 level knobs and 3 taps to send signals to 3 of the 4 total speakers (123, 234, 341, 412). This restriction of leaving the last accessory off is a nod to Coco Chanel and helps to ensure there is always some negative space even if a player's patch is particularly lively or overplaying. Just like on the original Trzypsy the level knobs do more than just adjust volume and work as fine tuning controls in the upper registers.

Another twist is the addition of a capacitive patch matrix. This functions similarly to the capacitor patch cords I encourage using with the Trzypsy, which evoke filtering and FM as well as another layer of unpredictability. It is located predominantly at the edges of the board and the center section. By connecting a handful of patch points to the outer edges, you feed them into the center pool for access by the rest of the group to access, Go Fish style. But these circuits are also bidirectional, so other signals will be fed back to you through these same pipes as well. These paths are intentionally obscured to discourage planned approaches and keep the spirit of improvisation, but here's a one time look at the guts if you want to come in with a map: 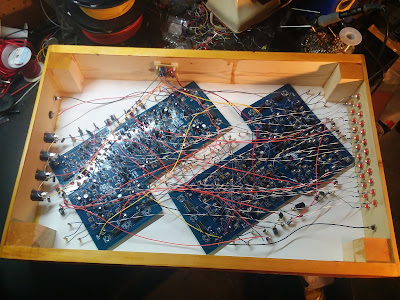 We can also expand this instrument into a wider and wilder system by making use of the 24 CV outputs on the side of the instrument (orange banana jacks). These are influenced by our play-style on the top interface and can control an expanded network of devices that use control voltages. File this under "extremely worthwhile, but requiring additional setup time". 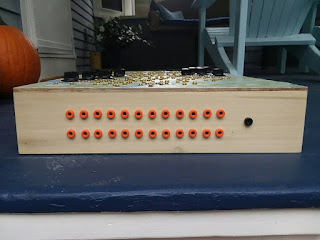 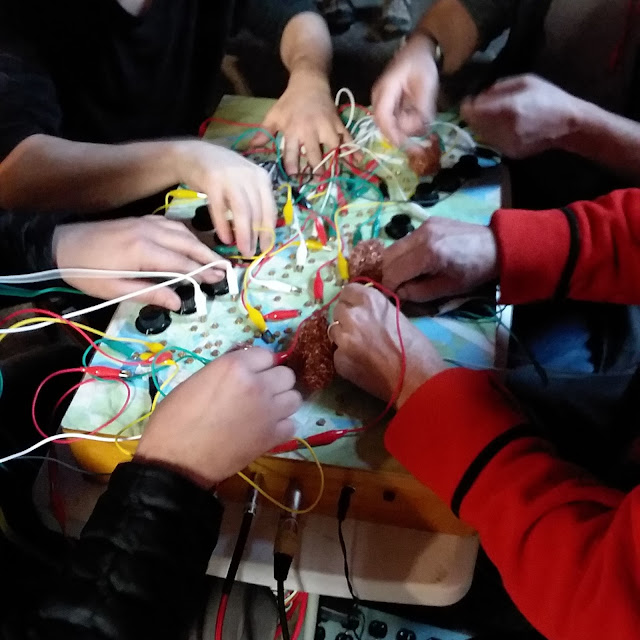 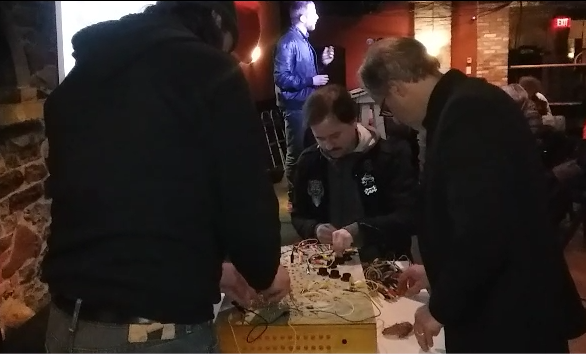 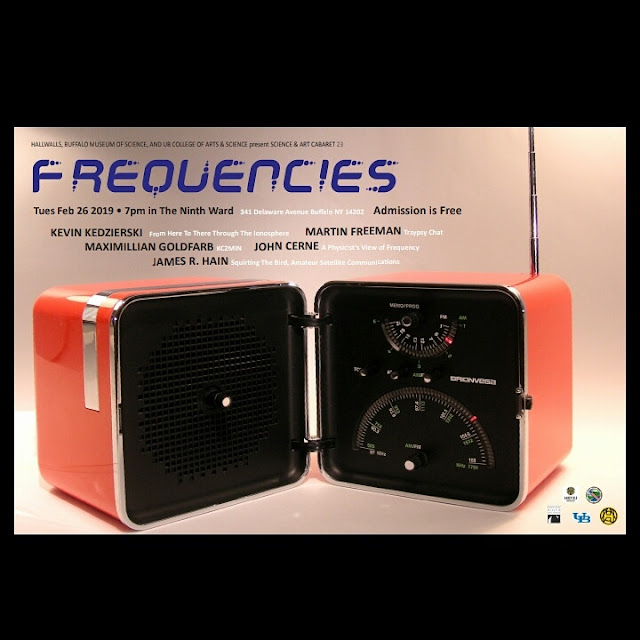 A nice flyer from the same event in Buffalo 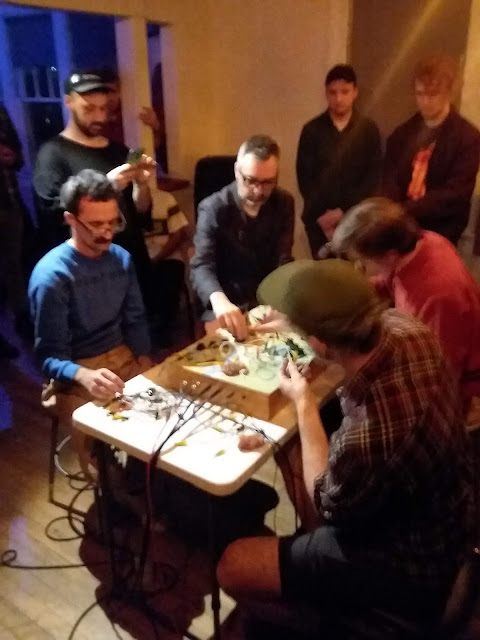 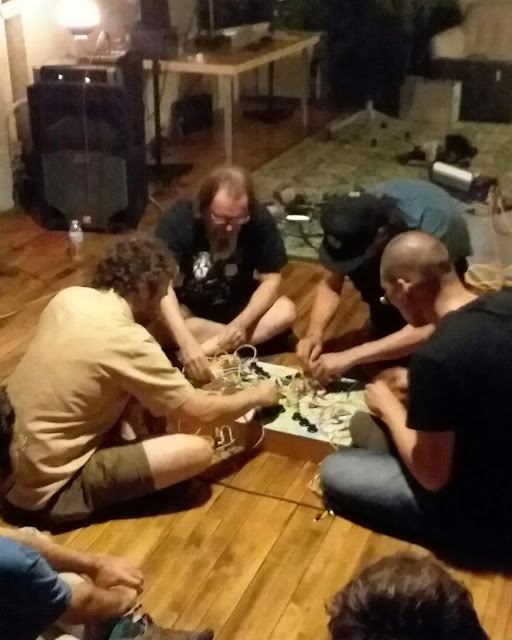 FAQ:
How do I get to play it?
A: It is intended for small groups to play in performance or part of an installation, ideally one that people can casually interact with. I am currently accepting proposals for performances (and looking for interested people to participate) as well as looking for somewhere it can be installed and available to the public. Contact me for booking information.

Can I hear it? Do you have videos of it?
A: There are a few short videos of this instrument and the original Trzypsy here

Is this actually a board game? Does it have rules of play? Is there a winner?
A: We can definitely play it like an atonal board game where players take turns making and breaking connections. I have a few ideas for rules, but would also like to see what players come up with while using it. I suppose if we play it long enough someone might figure out how to win, but for now I picture it as only ending when people have had enough of each other, like a 3 day Risk marathon with your inlaws. Please don't flip the board.

How do you make the panel art with those maps?
A: Nice paper and Modge Podge. You have to be patient between layers as it tends to shred or bubble-up if you rush things. I let the last layer dry overnight before cutting out holes. By the way, a portion of the panel art is made by my friends Pat Cain and Meghan Raham: The blue and white triangles that designate each player's output taps. I am also greatly inspired by my friend Bbob Drake, who stuffs maps into his printer to create panel artwork for his instruments.